The filming for the show “Betrayals” where Elena Lyadova, the famous actress, plays the main character, has recently started in Moscow. In the center of the plot is the story of an ordinary, at first glance, woman who controls her husband and three lovers on the side! An original plot, isn’t it? We don’t doubt this show will be twice as interesting to the people of this city for one of the parts is played by the Vologda native Artem Lyskov! 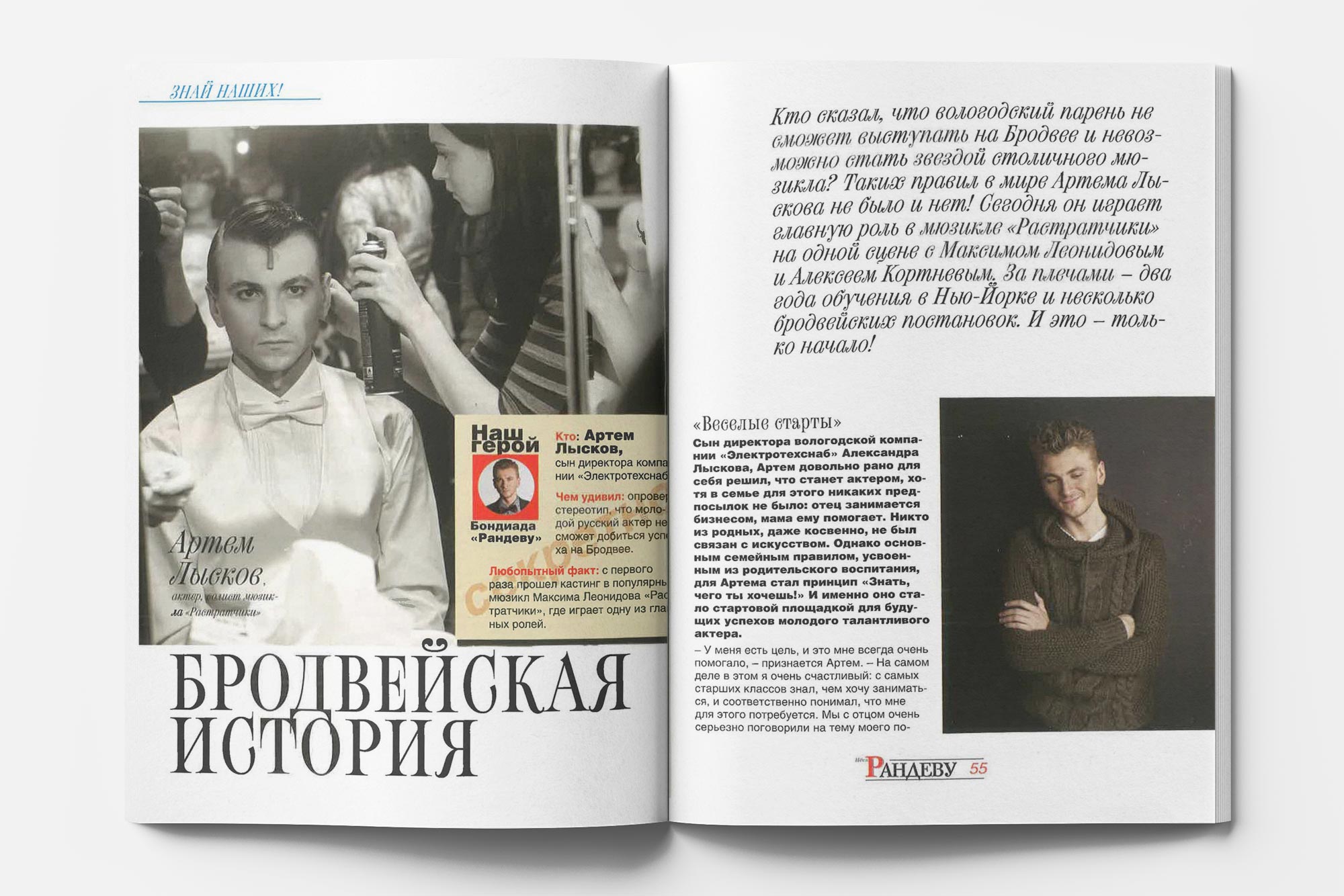 - The story of this project is quite interesting because it didn’t have the usual pattern of “getting a call-coming to the set-doing the filming” – says the actor. – I’ve been doing a lot of voice acting for foreign films recently (so if you listen closely, you might hear the well-known voice from Vologda in your favorite comedy or action film). And one time as I was going back from the studio I met my classmate in one of “Mosfilm” halls, she was in a hurry for this show’s casting. She invited me to go with her and I agreed without hesitation. Then there was the casting and I got the part. This is how a chance meeting at the studio can bring you new roles and partnership with great actors!

The cast of the show truly is impressive. Evgeniy Stychkin, Glafira Tarkhanova, Elena Lyadova… By the way, Elena became Artem’s partner. Not long ago the star of such films as “Lyubka”, “The geographer drank his globe away” and “Leviafan” was shining at the Cannes Film Festival’s red carpet and here she is today, smashing cars regularly in Moscow streets. However, only when she is in character.

- I’m happy I have the honor to work with Elena Lyadova. She is undoubtedly one of the best contemporary actresses and a very nice person I built good work relationships with, - says Artem Lyskov. – Of course, at first it seemed like she was very reclusive: she didn’t communicate with anyone too much, she didn’t talk loudly… But I think it’s completely normal. When we come to the set we are not ourselves anymore. Filming is a quick process, it’s difficult, there is no time to rehearse for three months. That’s why all the actors work at their own “kitchen”, and nobody knows which methods of preparation anyone uses. Some have to talk to everyone, tell jokes, make every cast and crew member laugh, others just need to be alone with themselves, close down a little bit to do their job skillfully. I think Lena Lyadova is in the second group. Watching her work is a great joy. I am convinced that many people can become good actors, but only few of them can be brilliant. When you see something like that it’s hard to look away. By the way, I noticed one peculiarity in Lena. Good actors often doubt their results! Did they do everything right? Did they give 100% of their abilities? This is what relates Elena and me.

The episodes with Artem Lyskov in them have already been filmed, but the young man doesn’t want to reveal all the secrets yet. We only know the actor’s part is “jesting”. By the way, it’s useful to note that Artem’s skills were highly rated by the show’s director Vadim Perelman.

- After the filming the second director called me and said that Vadim was very happy with my work and he was sure there’s a great career ahead of me, - Artem smiles. – It’s nice to know that my work was praised by a man who is connected to the world cinema (Vadim Perelman directed a movie with Uma Thurman, Dustin Hoffman, Anthony Hopkins and others. – editor’s note). Now I’m eagerly waiting when the editing and dubbing stage of the show’s development finishes and I’ll be able to see the result of my work! 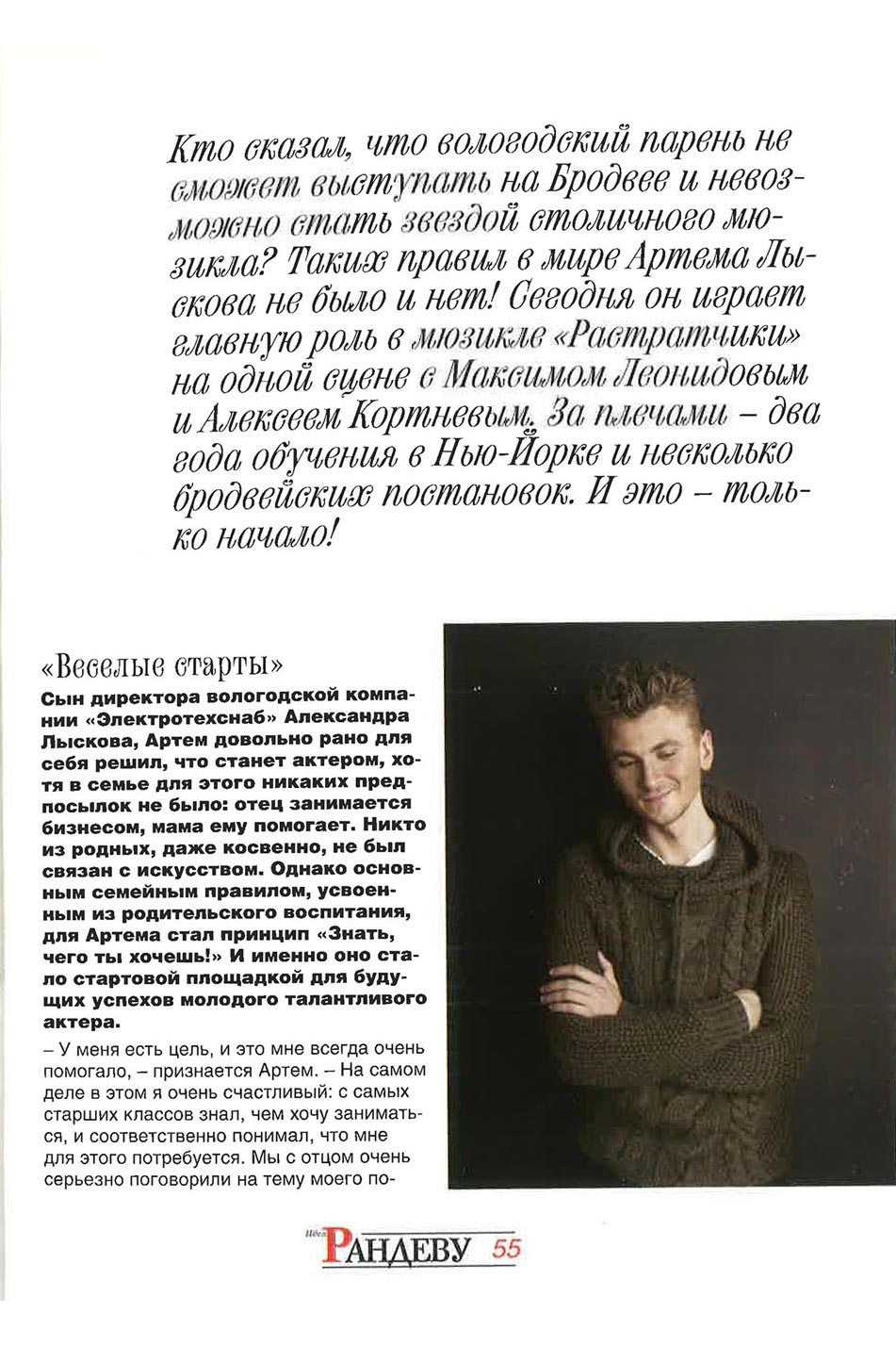