Theatre world is the same everywhere

Artem Lyskov started playing at the Vakhtangov Theatre as a student. He went to the USA in 2010 to study at the Lee Strasberg Theatre and Film Institute in New York. He played the main part in the famous “Threepenny Opera” musical on Broadway. When he returned to Moscow Artem started activelt doing films. His artistic baggage includes movies and shows like “Adjutants of love”, “Law and order”, “Soldiers”, “The cop in law”, “Marjina Roscha”, “The lost empire”, ”Rehearsal of life”, “ChB” etc. Artem has been teaching at the Shchukin University since 2013. 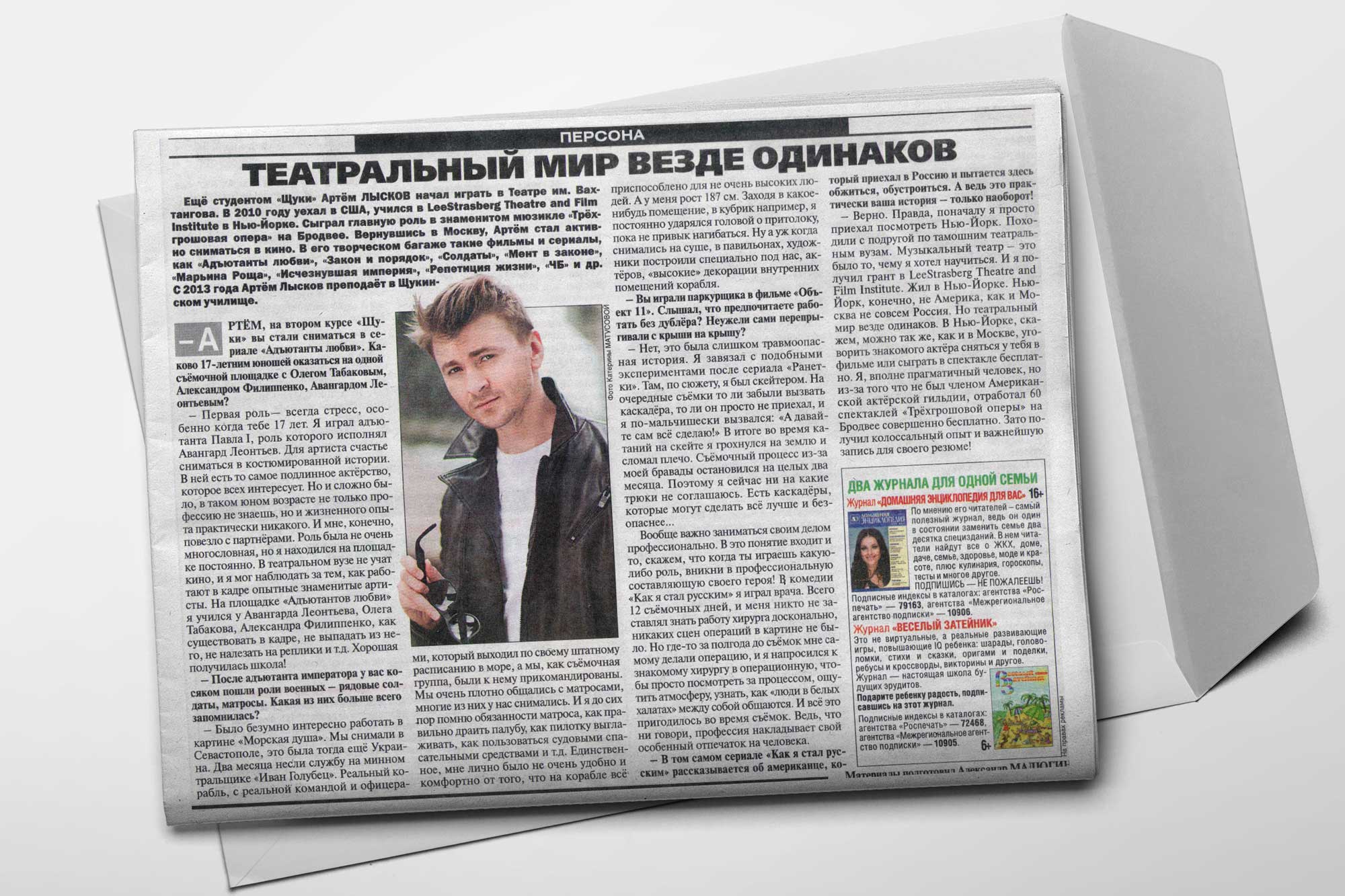 - Artem, you started playing in “Adjutants of love” when you were a second year student in Shchuka. What was it like to be on the same set with Oleg TabakovAleksander Filippenko and Avangard Leontiev as a 17-year-old student?

- The first oart is always a stress, especially when you’e a 17-year-old student. I played an adjutant of Pavel I who way played by Avangard Leontiev. It is a joy for an actor to play in a costume story. There is true acting in it, the acting that always interests everyone. But it was difficult, being this young you don’t know the profession yet and you practically don’t have any life experience either. Of course, I was lucky to have such partners. The part wasn’t too wordy, but I was constantly present on set. They don’t teach you to do films at a Theatre University and I got the opportunity to watch experienced famous actors work on camera. I was learning to live on camera, to stay in the frame, not to mess with the lines from Avangard Leontiev, Oleg Tabakov, and Aleksander Filippenko on the set of “Adjutants of love”. It was a good school for me!

- After the Emperor’s adjutant you started getting a row of military roles – soldiers, sailors. Which one was the most memorable?

- It was very interesting to work on a film called “A sea soul”. We were filming in Sevastopol which was a part of Ukraine back then. We’ve been serving on a minesweeper “Ivan Golubets” for two months. It was a real ship with a real team and officers, it had its staff schedule for going away into the sea and our cast and crew were seconded to it. We were in close contact with the sailors, many of them were extras in our film. And I still remember the duties of a sailor, I remember how to scrub the deck, how to iron the cap, how to use the ship’s rescue equipment and so on. The only thing is, I wasn’t very comfortable with the fact that everything on the ship was made for not very tall people. And my height is 187 cm. When I walked into a room, a cockpit for example, I always banged my head on the header until I got used to bending down. And when we were filming on land, in pavilions, the set designers built “high” sets of the inner rooms of the ship for the actors.

- You played a man who likes parkour in the movie “Object 11”. You are said to prefer working without a stunt double. Did you really jump from roof to roof by yourself?

- No, that was too risky. I stopped such experiments after “Ranetki”. There I was playing a skater boy. Either they forgot to call a stuntman for the filming or he just didn’t show up and I volunteered like a young boy: “I’ll do it myself!”As a result I fell down during the skating scene and broke my shoulder. The filming stopped for two months because of my bravery. That’s why I don’t agree to do any stunts anymore. There are stuntsmen who can do it better and safer…

It is important to do your work professionally. It also means that when you play a part you need to get to know the professional side of your character! In the comedy show “How I became Russian” I played a doctor. Only 12 days of filming, nobody forced me to learn how a surgeon works in detail, there were no scenes of surgeries in the film. But about six months before the filming I had a surgery done to myself, and I asked the surgeon I knew to come to the hospital and watch the process, feel the atmosphere, see how people in white robes communicate with each other. All of this proved to be helpful at the filming. Say what you want, but any profession has an impact on a person.

- That very show, “How I became Russian”, tells the story of an American who comes to Russia and tries to settle down and get used to living here. And this is practically your story, but the other way around!

- That’s true. Actually. At first I just came to New York to see it. My friend and I went to see different Theatre Universities there. Musica theatre was something I wanted to study. And I received a grant to study at the Lee Strasberg Theatre and Film Institute. I lived in New York. New York is not exactly America. Just like Moscow is not exactly Russia. But the theatre world is the same everywhere. For instance, in New York, just like in Moscow, you can persuade a fellow actor to play in your movie or do your theatre show for free. I am quite a pragmatic person, but because I wasn’t a member of the American actors’ guild I did 60 shows of “The Threepenny Opera” on Broadway for free. But it was an amazing experience and an essential point for my resume! 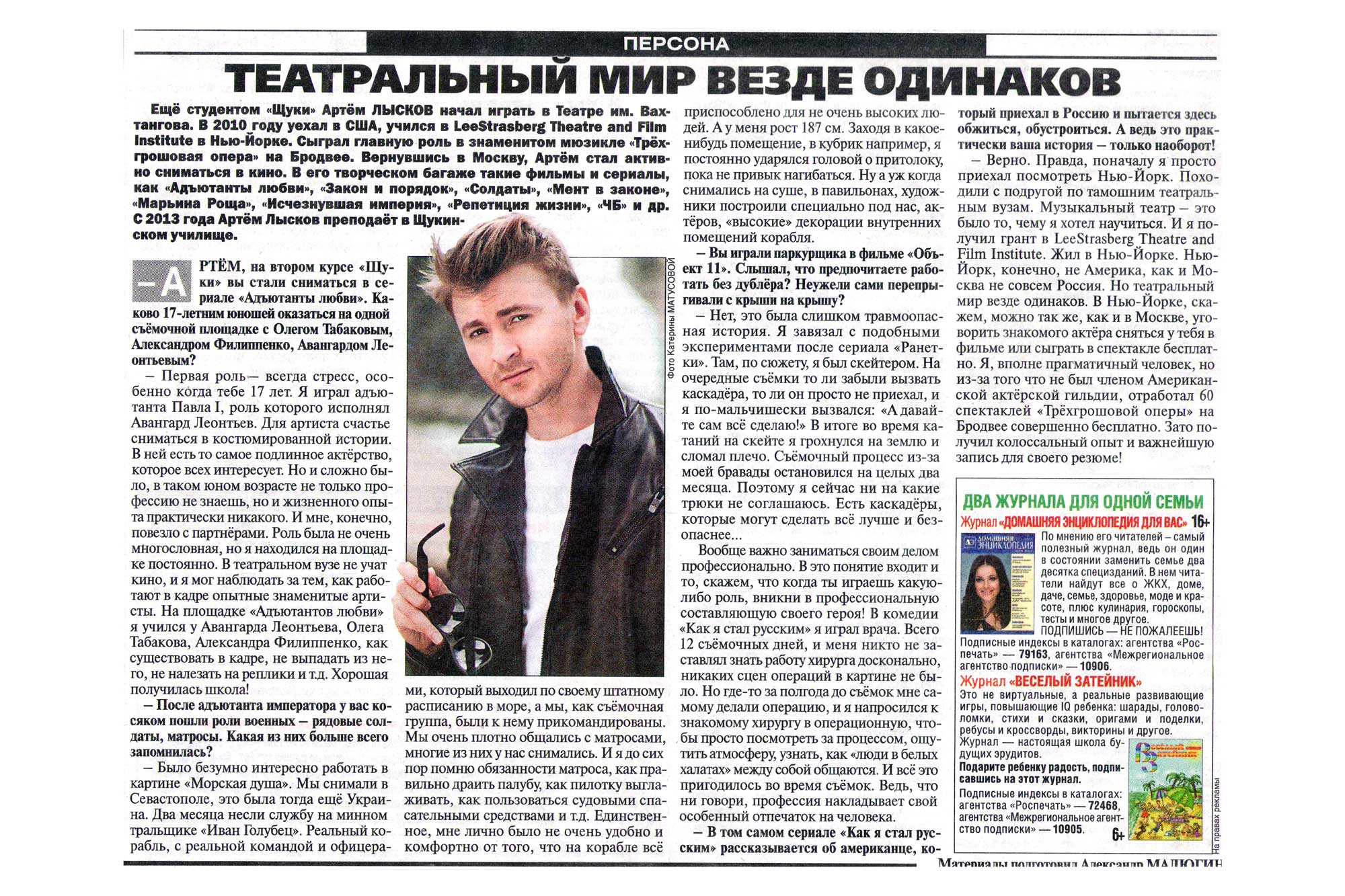