Artem Lyskov.
The actor:
no falsity, no cuts

He is not afraid to say that all his wishes come true. Yet, he explains: a wish is the aim to work hard for. Artem Lyskov is famous among Russian viewers for his work in movies and TV-shows. And musical theatre fans are delighted by his vocals. 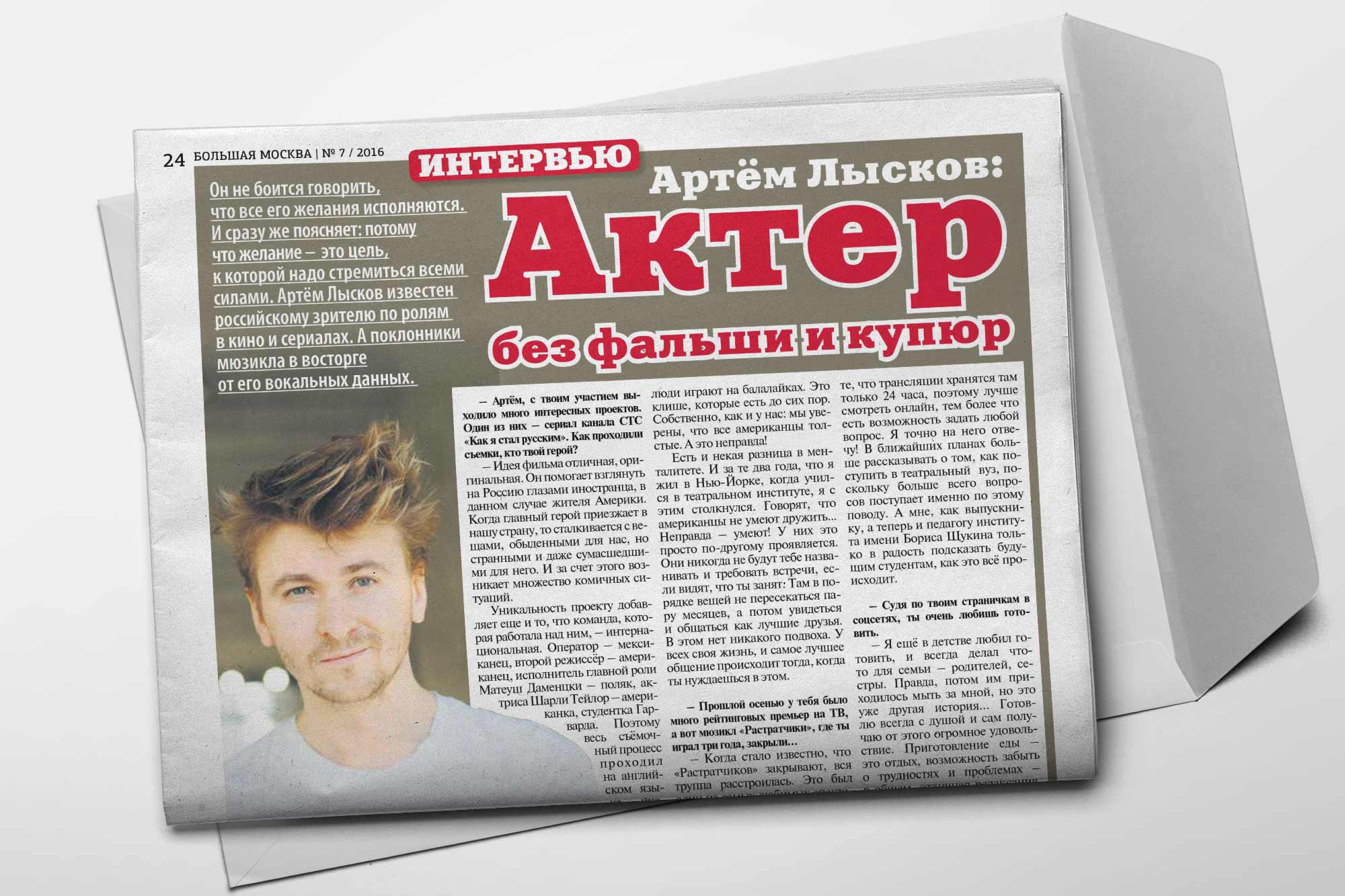 - Artem, you have taken part in many interesting projects. The STS show “How I became Russian” is one of them. How did the filming go, who is your character?

- The idea of the show is amazing, very original. It takes a look at Russia from a foreigner’s perspective, in this case the foreigner is American. When the main character comes to our country he faces things common for us, but strange and even crazy for him. This causes many comical situations.

The project is also unique because its cast and crew are multinational. The cameraman is Mexican, the second director is American, the actor playing the main character, Mateusz Damiecki, is Polish, the actress Charlie Taylor is an American Harvard student. So the filming had to be in English, otherwise our foreign colleagues wouldn’t have understood us. It spoke to me personally and reminded me of the time I had just arrived in the US and was only starting to learn about America. I found a lot of things strange and unusual.

- What exactly surprised you in the US?

- Everything was quite surprising there, a lot of things were new to me. Local residents actually believed there were bears walking along Russian streets, and all the people in Russia could play balalaika. Those cliches still exist. They exist in Russia, too: we are convinced Americans are all fat. That is not true!

There mentality is different, too. I had to face it during the two years I spent in New York studying in a theatre university. Americans are thought to be unable to make friends… Not true – they can! They just show it another way. They would never bother you with calls and demands to meet up if they know you are busy. It is considered normal not to see each other for several months and then arrange a meeting and still be best friends. There is no catch. Everyone’s got their own life and it is best to communicate when you actually feel the need for it.

- Last fall you had a lot of high rated premieres on TV, but the musical you starred in for three years, “Rastratchiki” (“Embezzlers”), was shut down…

- When we found out “Rastratchiki” was getting shut down, the whole company was upset. It was one of the theatre’s most loved shows, but all good things must end. I think it’s not bad closing a show when it hits its prime, it’s even better than closing it when the show stops being relevant. It will live in people’s hearts as colorful, harmonious and heartwarming as it always was.

- Spectators are always eager to look behind-the-scenes, to see how the show is made, how the performer gets ready for the stage. And you demonstrate it. How did this idea come to you? What else can we expect?

- Yes, I was probably one of the first people to learn about the “Periscope” social network. Today a lot of people use it. It is easy to find me there: my nickname is artemlyskov. I like social networks, using them is always a pleasure to me. I am happy to explain how theatre works, how I spend my days as an actor, where I go, how I prepare my parts, what difficulties I face in this profession.

People are tired of falseness, photoshopped images, fake stories. They want to see actors in real life, uncensored. You should know that broadcasts are only saved for 24 hours, so it’s better to watch it live, especially because there is a chance to ask any question. I will definitely reply! I am planning to talk more about entering a theatre university since most of the questions revolve around it. For me as the graduate and now the teacher of the Boris Shchukin University it is a pleasure to show future students how this all works.

- Judging by your social webpages you love cooking.

- I’ve loved cooking ever since I was a kid, and I used to constantly make something for my family – my parents and sister. True, they had to clean up after me, but that’s another story… I always cook from the heart and enjoy it a lot. Cooking is comforting, it helps you forget about difficulties and problems – it’s a great way to relax. I always look for new recipes, try them and treat my friends. It is also important to me to make every dish look presentable.

- What are your dreams and plans?

- I dream about many things and set goals for myself. I am used to achieving them. It is no miracle for me, I only set the goals I know I can get. There is so much I want to do: to study, evolve, reach new levels. I am waiting for new interesting parts.

I keep on my theatre work, take parts in movies and teach in the Shchukin University at the musical theatre acting department. This year I’m having several TV premieres: “Elder sister” on Channel 1 and “Sveta from another world” on STS. Besides acting I am planning to continue and develop my teaching work. At the end of fall I did acting workshops in Sakhalin for several days, I got some offers from other Russian cities. I am hoping to collect a group of students in Moscow by the start of next year. 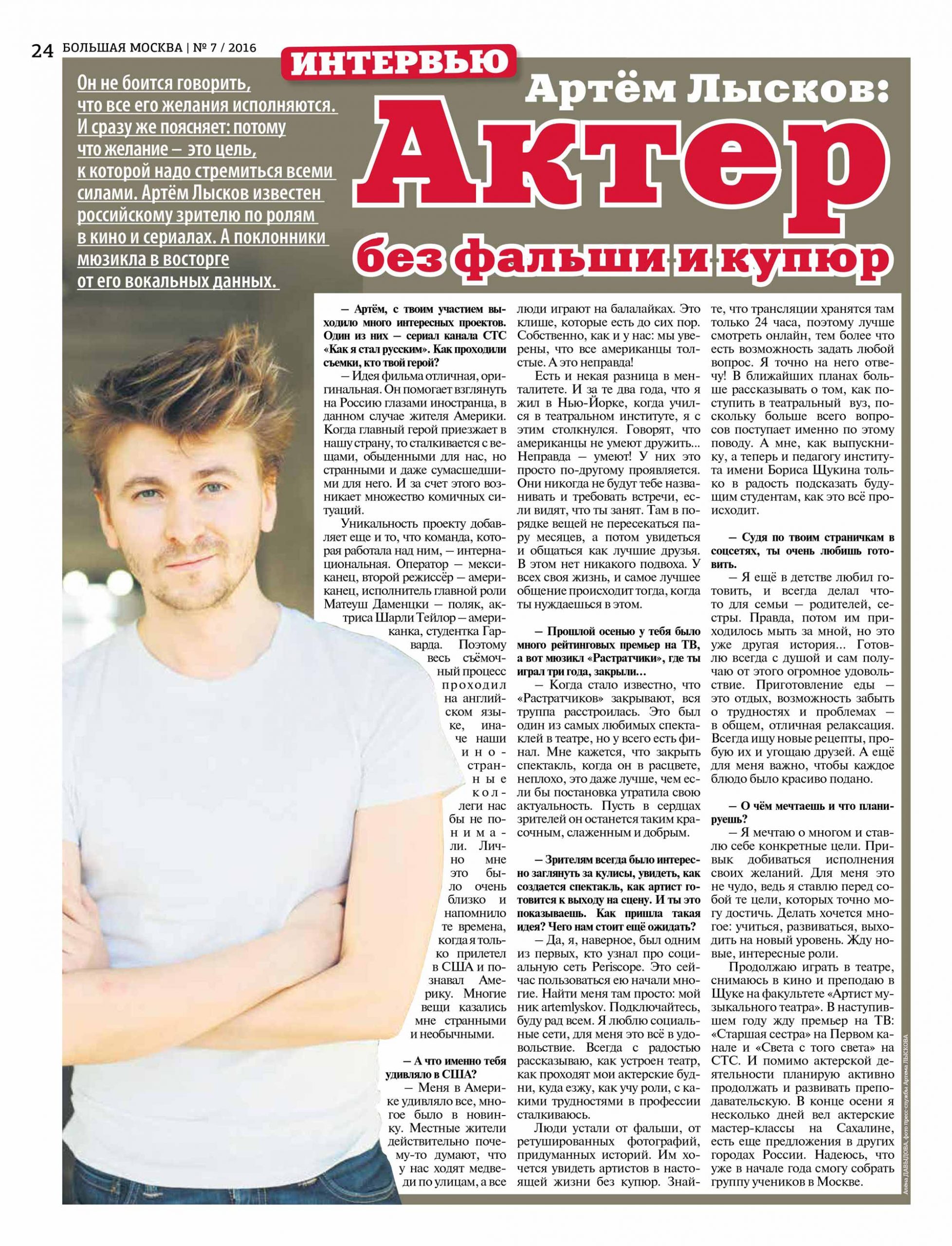