Artem Lyskov:
«I am a romantic in everything»

The famous actor Artem Lyskov would not leave our TV-screens, but besides that he also plays in the theatre, sings, does voice acting, has got American education and teaches at the biggest theatre University – the Boris Shchukin University.

Recently there's been a premiere of a new TV-show «Beekeeper» with Artem playing a part in it, and in the theatre the musical show composed by Lyubasha called «At the table in our favorite cafe» has just premiered, too. This Autumn a new show will premiere called «Sveta from the other world» where Artem had to play a female character, and a musical TV-showis in the making, too, but it's a secret for now…

I played the piano at four

- What is musical theatre to you? Why did you decide it was suitable for you? Who «opened your eyes» to this genre? Do you have an idol?

- When I was 10 I became interested in theatre, I went to see all the shows. My parents let me go alone, they gave me money for the tickets and booklets. And subconsciously I liked musical shows the most. There was no such concept as a «musical» back then, there were only shows where people acted, sang and danced. One of my favorite childhood shows was «The thirteenth star». We've all got predispositions, I relate to music. I learned to play the piano by myself when I was four, I was in a choir and I lived through music… That's why I picked musiclas!

When I came to Moscow to enter a theatre University I got to see the show “12 chairs” directed by Tigran Keosayan and choreographed by Egor Druzhinin. I mentioned the name of Egor Druzhinin for a reason. I like how he works both as a choreographer and an actor. For example he brilliantly acted the part of Leo Bloom in the musical “The Producers”. He is precise! He loves the genre he works with and it shows. I would love to work with him!

About Broadway and luck

- What do you remember about your first part in a musical? What part do you consider your biggest success?

- Musical theatre is an amazing genre! It’s the synthesis everyone wants to learn but very few succeed in it. You can’t dance, sing and act separately. All of these skills have to be developed at the same time. Right now I want to compose a program with the stage movement teacher and in this program we will explain acting through movement and add singing to it, too. An actor has to be natural and combine these three skills.

Voice is very important in a musical: I’ve got a dramatic tenor or a lyrical baritone. As they say in the USA, it’s a perfect voice for a male.

The first real musical I was in was “The Threepenny opera” in New York. We performed at a small Off-Broadway theatre, we even had a mini-orchestra. The most significant part for me is the part in “Embezzlers”. It’s a great dramatic material and I’ve never seen similar parts for that age, and I started rehearsing it when I was 25. Because most of the male characters are “princes”. But the shows are not about them. But here we’ve got the main character and the story is about him! I consider this great luck and a grand experience. The project is closed now, but I can’t say I regret it. That stage is over, I got everything I could out of this character and now I’m ready for the next step. A significant musical in my life was “The Producers”, my intuition has never deceived me and I believe this project will come to me. There are roles there for me.

What kind of love exists in this world

- Do you believe in fatal meetings? Does love at first sight exist?

- Many successful people these days state that they follow a motto. Do you have a motto?

- Love and enjoy everything you do.

- Do you think women should be feminine? Do you like giving flowers?

- Of course! Ladies should be ladies. I love giving gifts and surprising people. When you know what she’s dreaming of and help her get it it’s really cool. And the best thing is seeing those happy eyes later!

I am a romantic in everything and I think it’s a special treatment of life. Those who are not romantics, they don’t know what a sunset is, what a sunrise is, and I understand those things and I feel them. Romance is a virus and if you’ve got it everything seems romantic to you.

Wishes for the readers of “Telek”: Believe in yourselves, your strength and your dreams. Don’t be afraid to dream and don’t doubt that everything is possible. There are no unrealizable dreams!

Details
…And this is just the beginning

- A traditional question… what are your plans for the future?

- There are plenty:I want to advance as a teacher, there was a workshop in February where singing and acting were combined. I am eagerly waiting for that new musical movie we’re filming right now. I’m hoping for new theatre projects. I’m also interested in developing my Youtube blog that I’ve recently started thanks to my fans. And it’s just the beginning that will stimulate me for more filming.

In the first person
To my mum in Vologda, by car

- There are two processes that allow me to relax: cooking and driving. I love cars, the fact of movement, - says Artem. – And in my schedule a car is not just the means of transportation. For example, I often listen to audiobooks or radio performances while I’m driving. I like being able to get in the car at 5 am and ring my mum’s door at 11: I’m home! It’s the feeling of freedom!

- What do you appreciate the most in a person?

- Which rule of life would you never give up?

- What should a man dream of?

- All people should have their own dreams. I dream of being healthy and evolving.

- The one that’s appropriate for the occasion.

- Artem, you went abroad to study for the grant. Did your family support you? How can one get a grant for a free education abroad?

- Many Universities of the US participate in grant programs. I found out about the scholarship system by accident and I didn’t even think it would work out. There was a lot of filming in Moscow at the moment, I was planning to work in a theatre and wasn’t going to leave. My friend and I went to new york for a vacation where we also checked out some of the theatre Universities. We got to see an open class in acting and singing at the Lee Strasberg University. I saw the way those guys worked, felt that atmosphere and realized I wanted to study there. When I came back to Moscow I started searching for the details of enrollment. Of course I talked to my parents, I needed both financial and moral support. My dad agreed that it was never too late to study and he said: “If they pick you I’ll help”. It’s not easy winning a grant. But I did it. I found the grant on the University’s website. I’ve always been independent: to begin with, when I was 10 I was allowed to go to the theatre by myself. I moved from Vologda to Moscow when I was 16. I got out of my parents’ nest early and I’ve always been credible.

- Artem, you voiced (dubbed) a lot of films. Some people say it’s easier to act than voice act – is that true?

- The process of dubbing is technically difficult. As an actor you don’t have any chance to prepare. You come in and read here and now. Only once you get to the studio you realize who your character is and what he wants. It would be easier if we could prepare. We would work better and clearer. But since those movies are kept secret it’s impossible! We only work well because we’ve got experience and gaining this experience is very very hard. When we start voicing a movie it’s the first time we see the text and the character and we need time to feel him, to understand his pace, his rhythm, hostory. Sometimes we voice the film till the end and then the director allows us to go back to the beginning to voice the first scenes again because at first we didn’t understand who the character was yet. 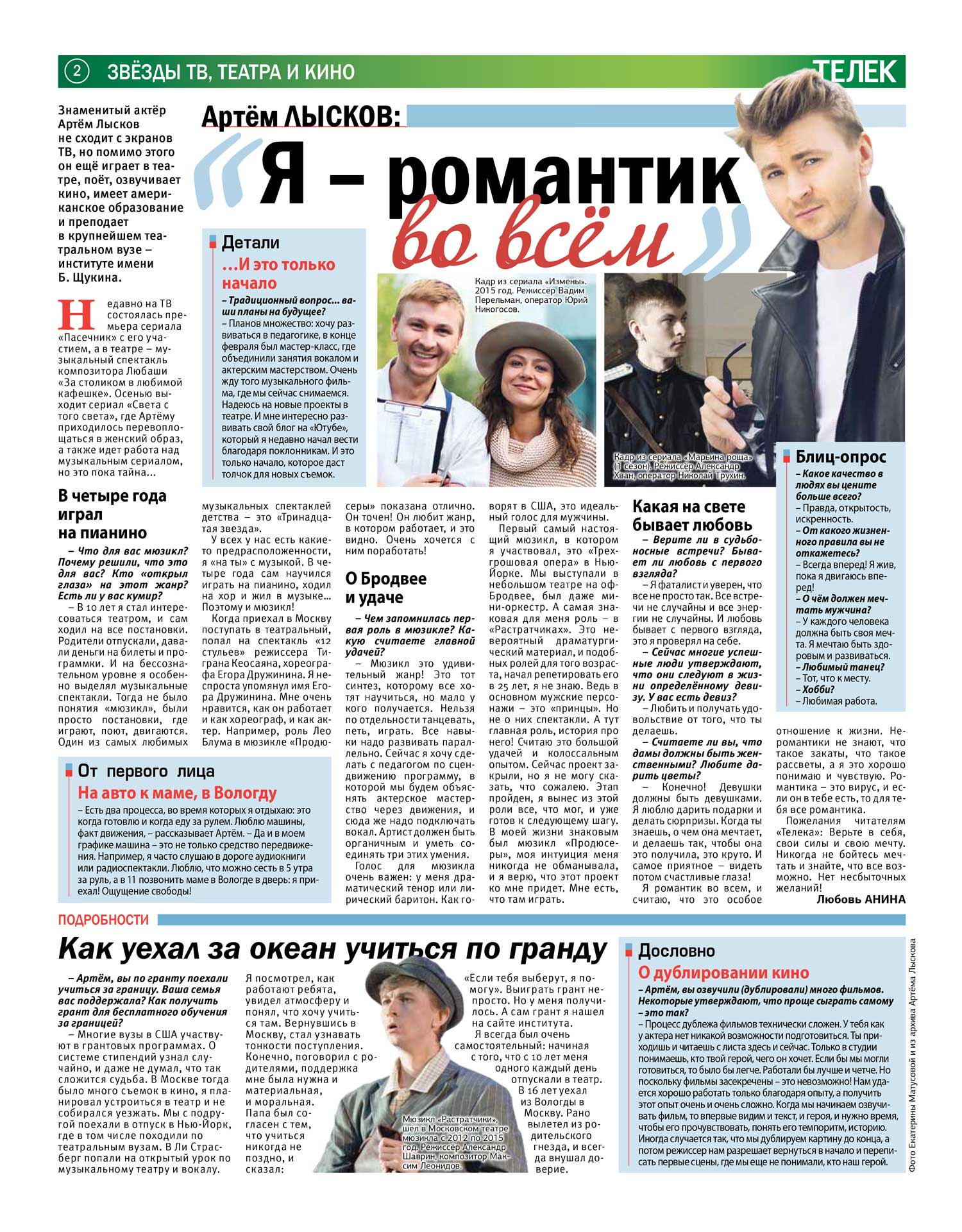