Artem Lyskov missed out on happiness

For the part of a shy and hesitant Koly Platonov in “Ranetki” Artem Lyskov sacrificed playing a main character in another project. As it turned out it was the right move. For as the show progressed his character grew from a fourth plan character into one of the main ones. 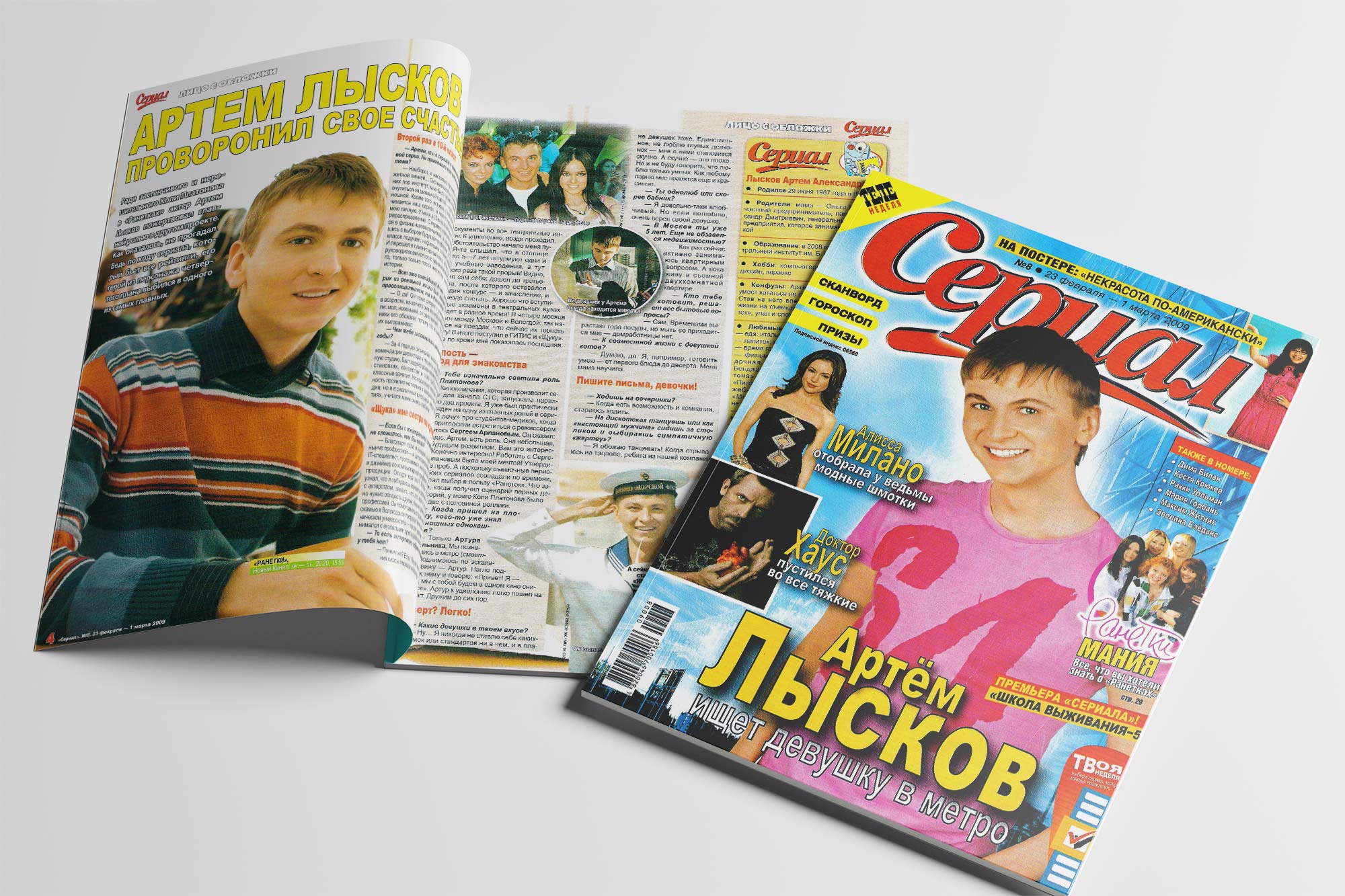 To the 10th grade for the second time

- Artem, you’ve been in the show since the first episode. Has the school setting wearied you?

- On the contrary, I’ve grown so attached to this plot… Having graduated from high school and, recently, from the University, it was nice for me to return to the school days – even if it’s just for the show. Besides, the story that takes place at the beginning of our show is a little similar to my own one. We had a reallocation when I was in the 10th grade. I had been studying in the physical-mathematical class since the first grade, and then, when I realized what I wanted for my future occupation, in the 10th grade I thought: why do I need science? And I transferred to the humanitarian class and the classroom teacher was a young history teacher who had just graduated from the University.

- What a coincidence! So was that real life history teacher a human rights activist like Rasskazov?!

- Oh yes! He was arguing with older teachers, too, and that was the reason he was disliked: he was new and he was defending his rights… But students loved him because he was often covering them.

- What do you remember about your school years?

- 4 years before graduating the principal suggested I should join a theatre studio. I participated in a lot of shows and concerts and I started skipping school. But since I was active not only in the theatre studio but also in various school events the teachers liked me very much.

“Shchuka” is my sister by blood!

- If it hadn’t worked out with the theatre studio what would you be doing now?

- Thanks to my dad I am educated in a profitable field – I am a certified IT-specialist, a programmer, a web-designer and a computer post-production graphic designer. Where did it all come from? When dad found out I was going to connect my life with acting he said it was all good but I would need to study another more profitable profession. He helped me enroll in the Vologodsky state technical University – I had classes with the University teachers after school.

- So you didn’t receive any acting education?

- Why not? I did! After finishing school I went to Moscow and applied to all the theatre Universities. Surprisingly I was successful in all of them and this fact started to scare me. I had heard that people were trying to get into Moscow’s Universities for 5-7 years and I did it on my first attempt! I must have jinxed it: I got to the third stage which was the penultimate stage before enrollment, and I started failing everywhere. It’s a good thing the entry exams are conducted at different times in theatre Universities! For four months I was traveling between Moscow and Vologda: I was so sick of traveling that I can’t stand it now! After all, I was accepted into GITIS and “Shchuka”. The latest seemed more related to me.

Audacity is an excuse for acquaintance

- Did the part of Kolya Platonov fit you from the start?

- The company that was producing shows for STS created two projects at once. It was practically confirmed that I would play one of the main characters in the show called “I cure” about medical students, when I was invited for a meeting with the “Ranetki” director Sergei Arlanov. He said to me: “Artem, there is a part for you. It’s not big, but it’s got potential. Are you interested?” Of course I was! It was my dream to work with Sergei Arlanov! They gave me the part without casting. And since both shows were beinf filmed simultaneously I chose “Ranetki”. It was funny because when I received the script for the first ten episodes it turned out my Kolya Platonov only had two and half lines.

- When you arrived on set, did you already know some of your fellows from the show?

- I only knew Artur Sopelnik. We met each other in the underground (laughing). I was going up the escalator and I saw Artur. I approached him boldly and said: “Hi, I’m Tema, we’ll be filming together.” Artur was suprisingly easy to come in contact. We are friends to this day.

- Well… I never set up frames or standards for anything and it is the same case with girls. The only thing is, I don’t like stupid girls, they bore me. And being bored is bad. But I can’t say I only like smart ones. As any guy I like a girl to be pretty, too.

- Are you a one-girl guy or a womanizer?

- You’ve been in Moscow for five years. Have you got your own property yet?

- Right now I am actively solving the housing problem. But at the moment I rent a one-bedroom apartment.

- Who cooks and deals with domestic matters for you?

- I do it myself. Sometimes there appears a bunch of dirty dishes but I have no choice but to clean up – I don’t have a housekeeper.

- Are you ready for living together with a girl?

- I think I am. For example, I can cook – from starters to desserts. My mum taught me.

- When I get the time and company I try to attend them.

- Do you dance at discos or do you sit at the table and pick a cute “victim” like a “real man”?

- I love dancing! When I’m having fun on the dance floor the guys from our company sometimes start filming me on their phones to have a good laugh watching it later. It was “Shchuka” that made me fall in love with dancing – especially jazz dancing.

- Do you meet girls in clubs?

- It happened a couple of times. But if you like the person it doesn’t matter where you met them. A couple of days ago a girl approached me in the underground – I was in such a hurry to get to a meeting that I left my car outside and got the underground train instead for the first time in a while. Overcoming shyness, she asked me if I was one of the actors in “Ranetki” and what my name was... All in all, we got acquainted, but I was running late so I had to say goodbye. Later I realized my mistake – I should’ve asked for her phone number! But, I think it’s not a problem to find me online these days and send me a message. I’ll be happy to respond!

Education: graduated from the Boris Shchukin Theatre University in 2008

Incidents: Artem can’t ride a skateboard. When he tried it for the first time on the set of “Ranetki” he dell down and broke his arm 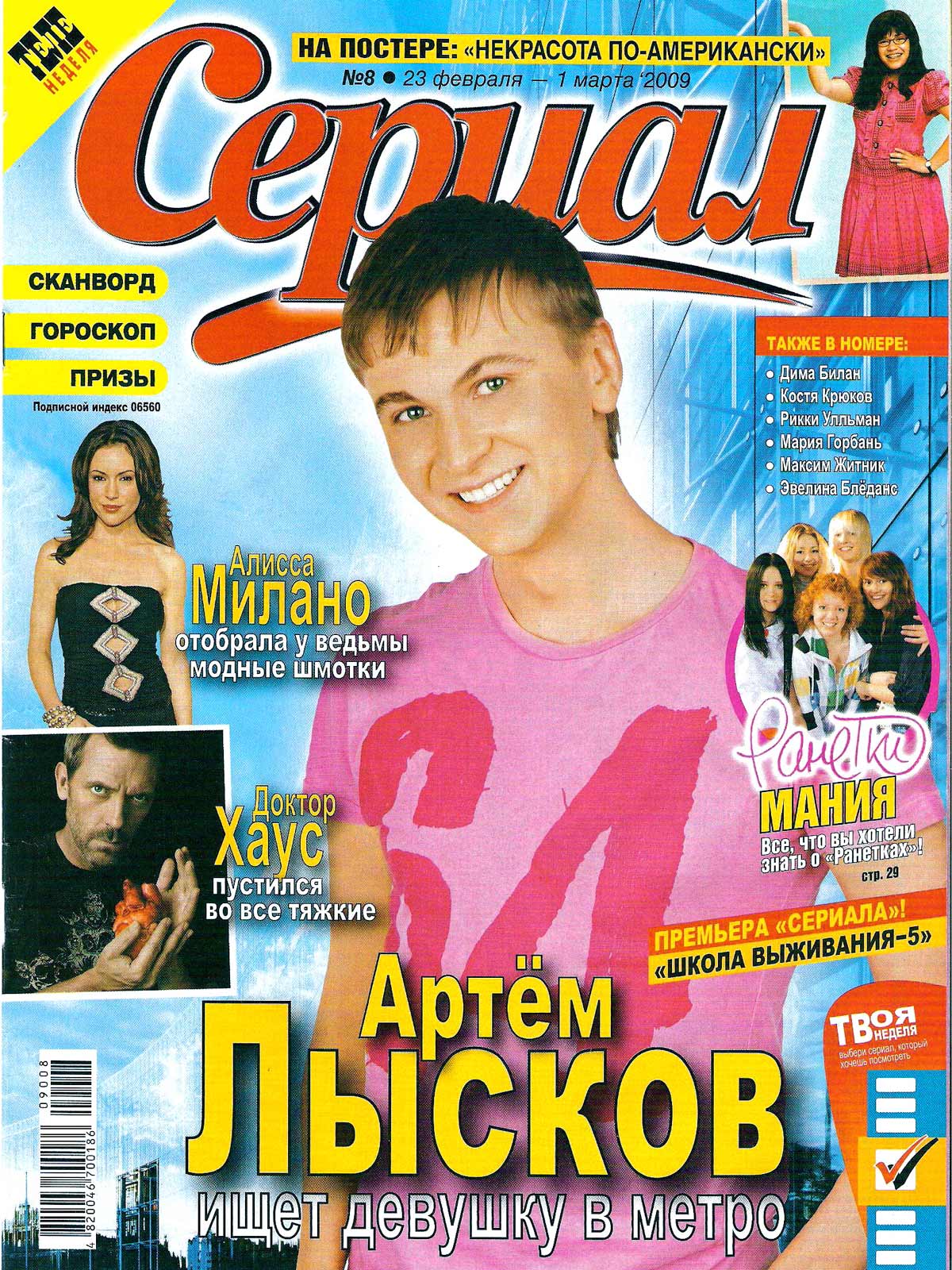 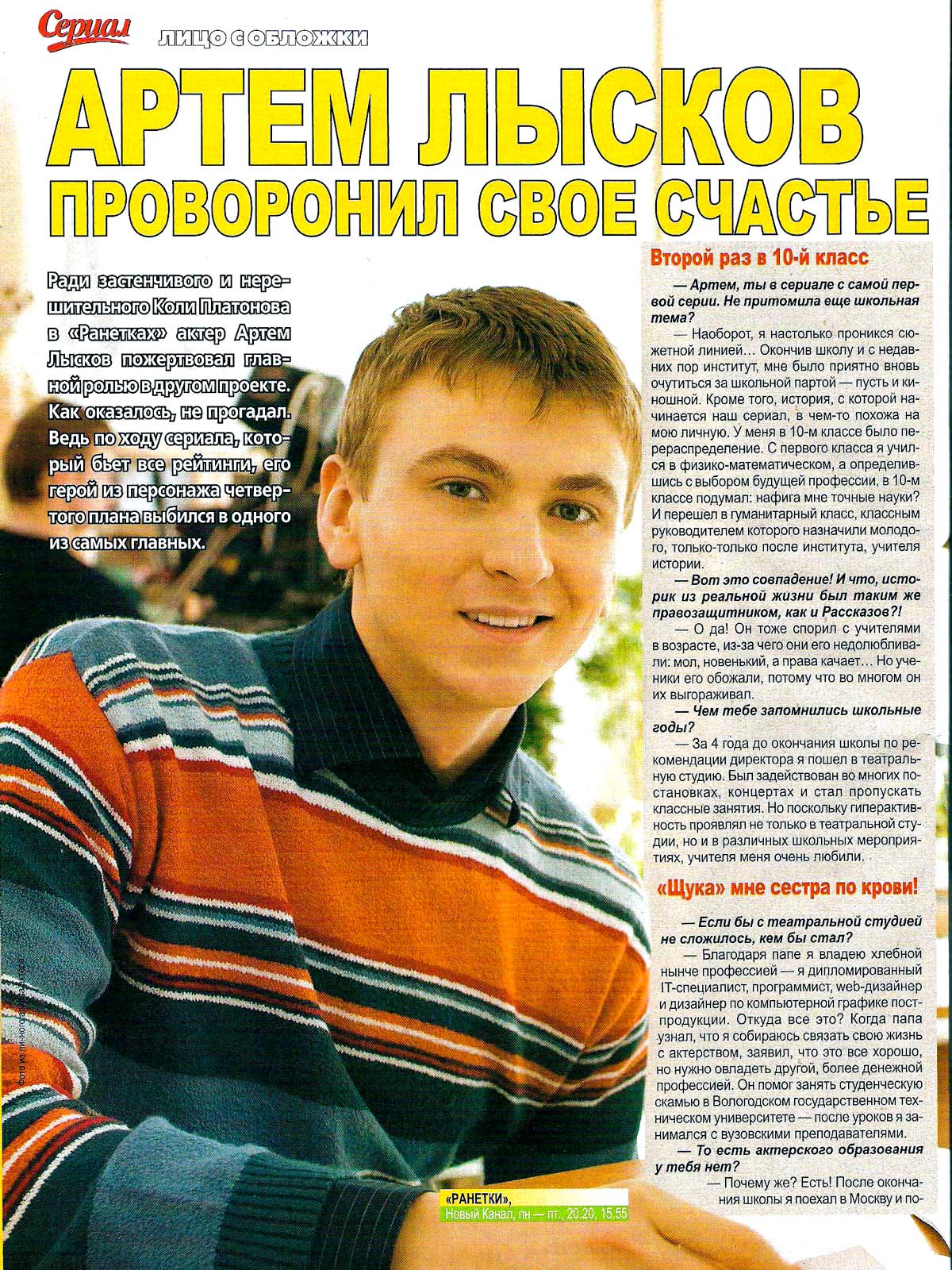 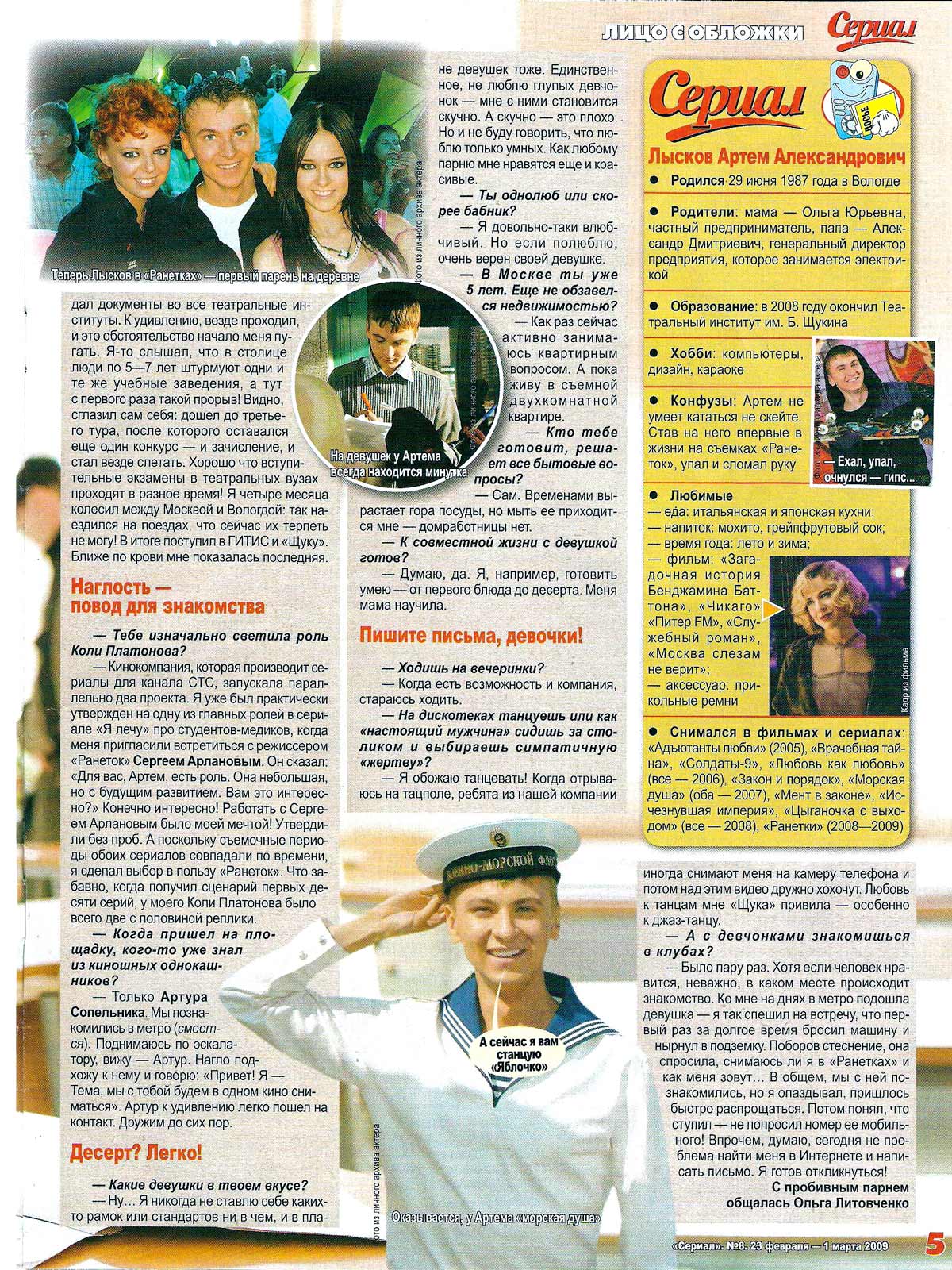