Artem Lyskov:
Being noticed is a victory anyway

Young actor Artem Lyskov is already known to the viewers of several generations: the older ones know him from shows on NTV and Channel Russia, the youngsters – from the main part in “Ranetki”. But it turns out it’s only one of Artem’s professional sides. He also acts in the Moscow Musical Theatre, does voice acting and teaches acting to his students. He told all of this in an exclusive interview to “Celebrity trend”. 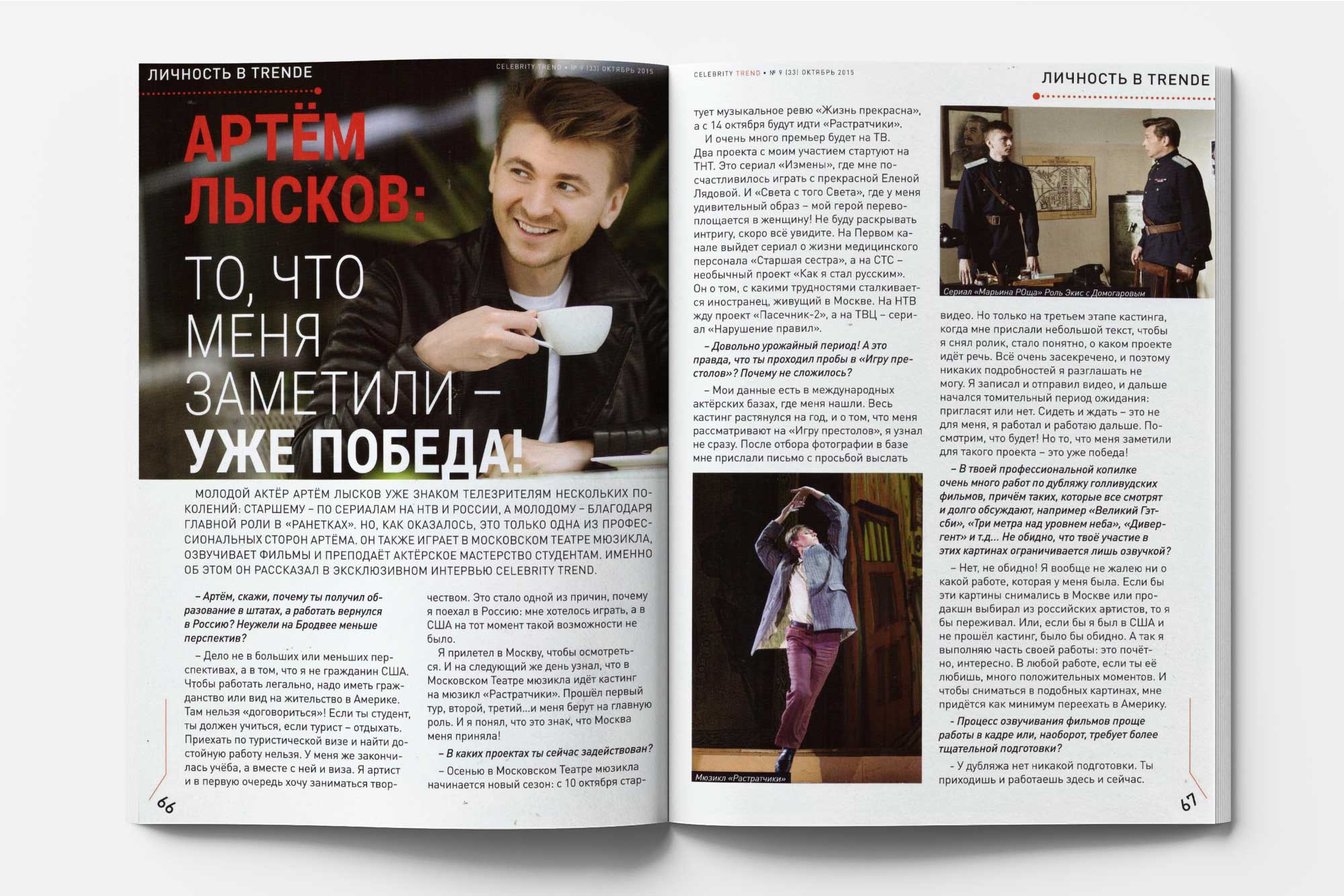 - Artem, tell us, why did you study in the States but came back to work in Russia? Is the Broadway career less promising?

- It’s not about perspectives, it’s about the fact that I’m not a US citizen. You need to have the citizenship or the residence permit to work legally in America. You can’t just “arrange things” there! If you’re a student you have to study, if you’re a tourist – you have a vacation. You can’t come in with a tourist visa and get a decent job. My studies finished and so did my visa. I’m an actor and first of all I want to do my artistic job. It was one of the reasons I came back to Russia: I wanted to act and I didn’t have that opportunity in the USA at the moment.

I came to Moscow to take a look around. And the next day I found out there was a casting for a new musical “Embezzlers” in the Moscow Musical Theatre. I got through the first round, then the second and the third ones… and I got the main part. And I knew it was a sign that Moscow accepted me!

- What projects are you working on right now?

- A new season is starting in the Moscow Musical Theatre this Autumn: a musical revue “Life is beautiful” is starting on October 10 and “Embezzlers” will start on October 14.

There will be a lot of TV-premieres. Two of my projects are starting on TNT. The show called “Betrayals” where I was lucky to act with Elena Lyadova. And “Sveta from the other world” where I’ve got an amazing role – my character turns into a woman! I won’t reveal the secrets, you’ll see everything soon. On Channel One a show about medical staff is coming out, it’s called “Elder sister” and an unusual project will be airing on STS called “How I became Russian”. It’s about the difficulties a foreigner faces when he comes to live in Moscow. I’m waiting for the NTV project “Beekeeper-2” and the TVC show “Breaking the rules”.

- It’s quite a fruitful time for you! Is it true you auditioned for “The game of thrones”? Why didn’t that work out?

- Information about me is in the international actors database, that’s how they found me. The whole casting process lasted a year and I didn’t find out from the start I was considered for a part in “The game of thrones”. After they picked my photograph from the database I received a letter where they were asking me to send them videos. It was only on the third stage of the casting when I received a small excerpt to film a video I understood what project it was. It’s all top-secret information so I can’t give you the details. I recorded a video and sent it to them and then the agonizing period of waiting began: would they invite me or not. Sitting and waiting is not for me, I was working and I keep working now. We’ll see what happens! But being noticed for such a project is a victory anyway!

- In your professional experience there were many voice acting credits for the Hollywood movies, the ones everyone watches and discusses for a long time, such as “The great Gatsby”, “Three steps above Heaven”, “Divergent” etc… Are you upset about being nothing more than a voice actor for such films?

- No, I’m not! I don’t regret any work I’ve done. If those movies were filmed in Moscow or they were casting among the Russian actors, then I’d be worried. Or if I were in the US and didn’t get through the casting, that would be upsetting. But the way it is, I was simply doing my job: it’s honorable, interesting. In any job you do, if you like it, there are many positive moments. And I will need to move to America, at least, to act in such movies.

- Is it easier to do voice acting than working on camera or does it require a more thorough preparation?

- There is no preparation for voice acting. You just come in and start working here and now. You look at the text and just read it. That’s it. Voice acting is very intuitive, you haven’t got much time to understand the character you are voicing. Yes, there are moments when something doesn’t work out and then we finish the movie and go back to the start to voice it again.

- You are a versatile actor: you do musicals, shows, movies and voice acting. What do you like the most? What is closer to your heart?

- I’ve been doing films and drama theatre for many years and I can feel that kind of work very well. My love for musicals is something new, I’ve got room for improvement and development in this genre.

I’ve been studying musicals for two years in New York in the Lee Strasberg University at the musical theatre department, but I still keep learning: in terms of practice – working in the theatre, and theory. I like the fact that as I teach students I learn something new myself. Two years ago I was invited to my dear Boris Shchukin University to be a young teacher at the “Musical theatre actors” faculty. The students have taught me so much. When I explain the basics of this profession to them, I refresh a lot of them in my memory. I can say it’s a symbiosis: they learn from me, I learn from them. Right now I’m concentrating on musical theatre in my career. It’s a promising genre, it’s very interesting but very difficult at the same time. I can feel I’ve got the talent for it and it gets twice as interesting to move forward.

- What is your brightest artistic-working memory or impression?

- The brightest one is the first time on a professional stage in Moscow. Yes, I did play in a Vologda theatre, but I started doing it seriously only when I came to Moscow. When I was finishing my first year and starting my second year I got to be on the Vakhtangov Theatre stage with the greatest actors for the first time. Not everyone can even dream of this! My first professional show was the benefit performance of the great actor Vasiliy Semenovich Lanovoi, the show called “Frederic, of the Boulevard of crime” where I had a small part. Natalia Maksimovna Tenyakova (The Chekhov MAT Theatre actress) and Nonna Grishaeva were my partners besides Vasiliy Semenovich. Of course, I was nervous, worried. But that was the moment I thought: that’s it, my dreams are coming true!

The Vakhtangov Theatre stage will forever remain significant, dear and thrilling to me. And I’m sure I’ll come back to it. 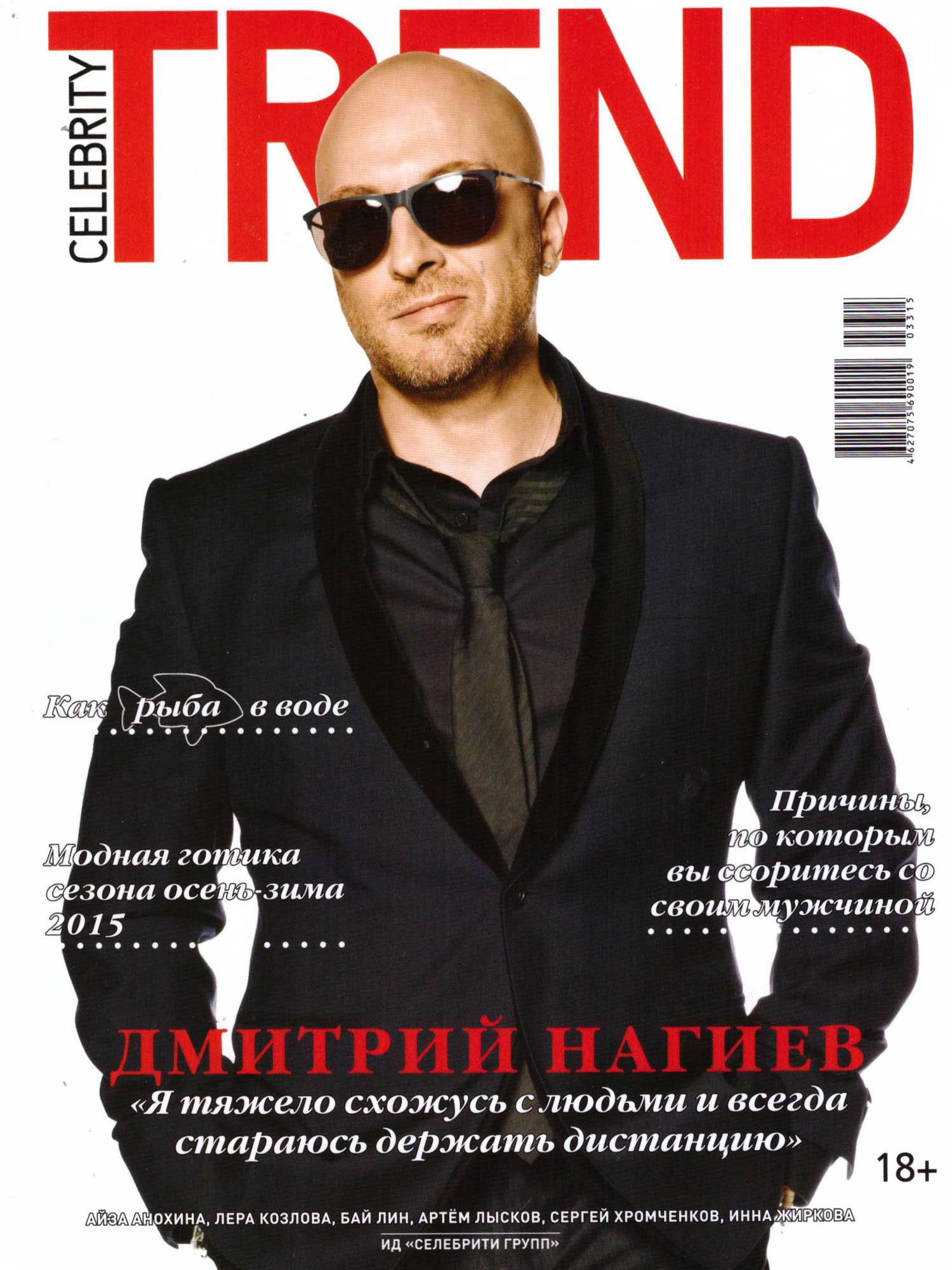 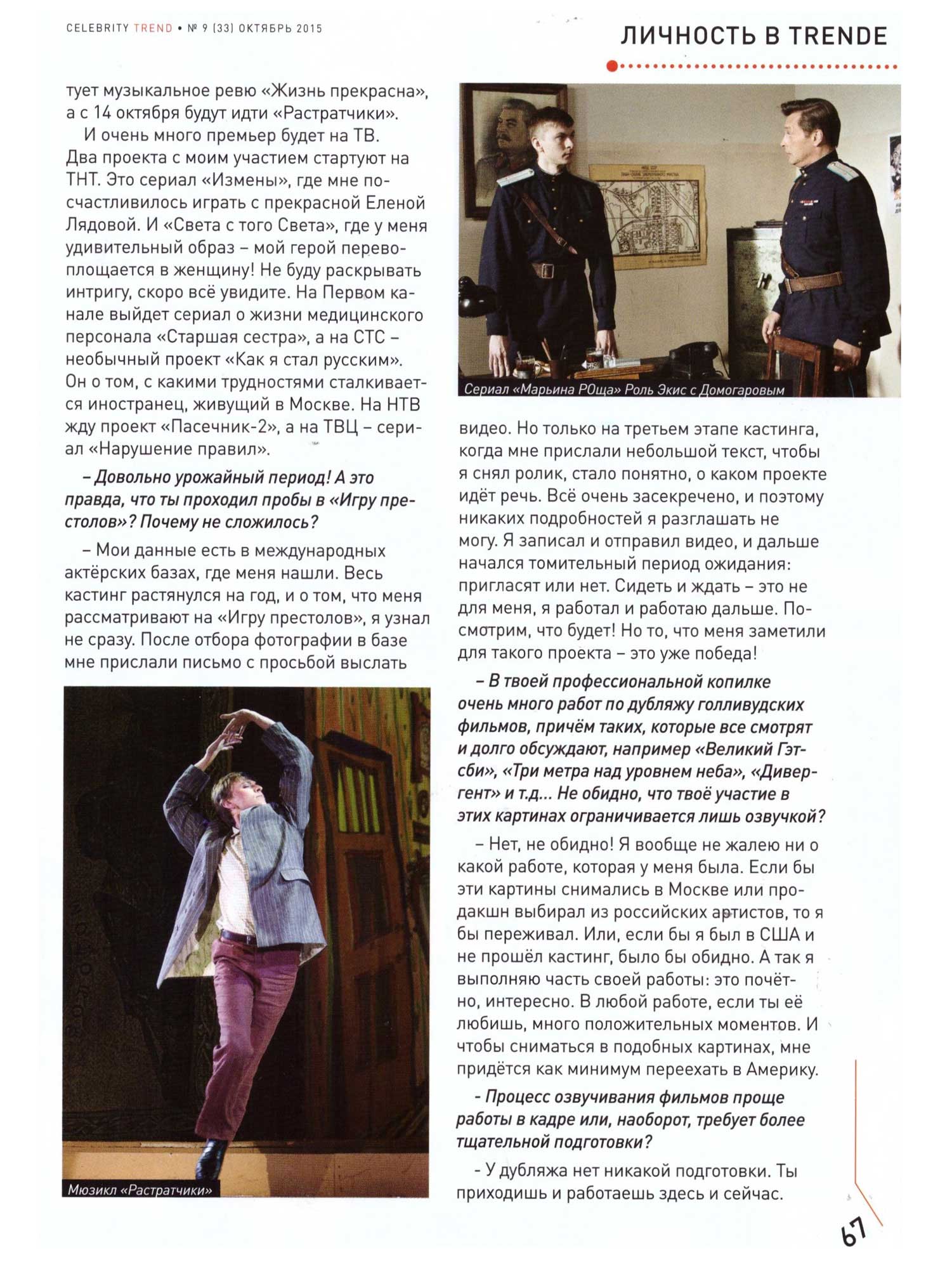 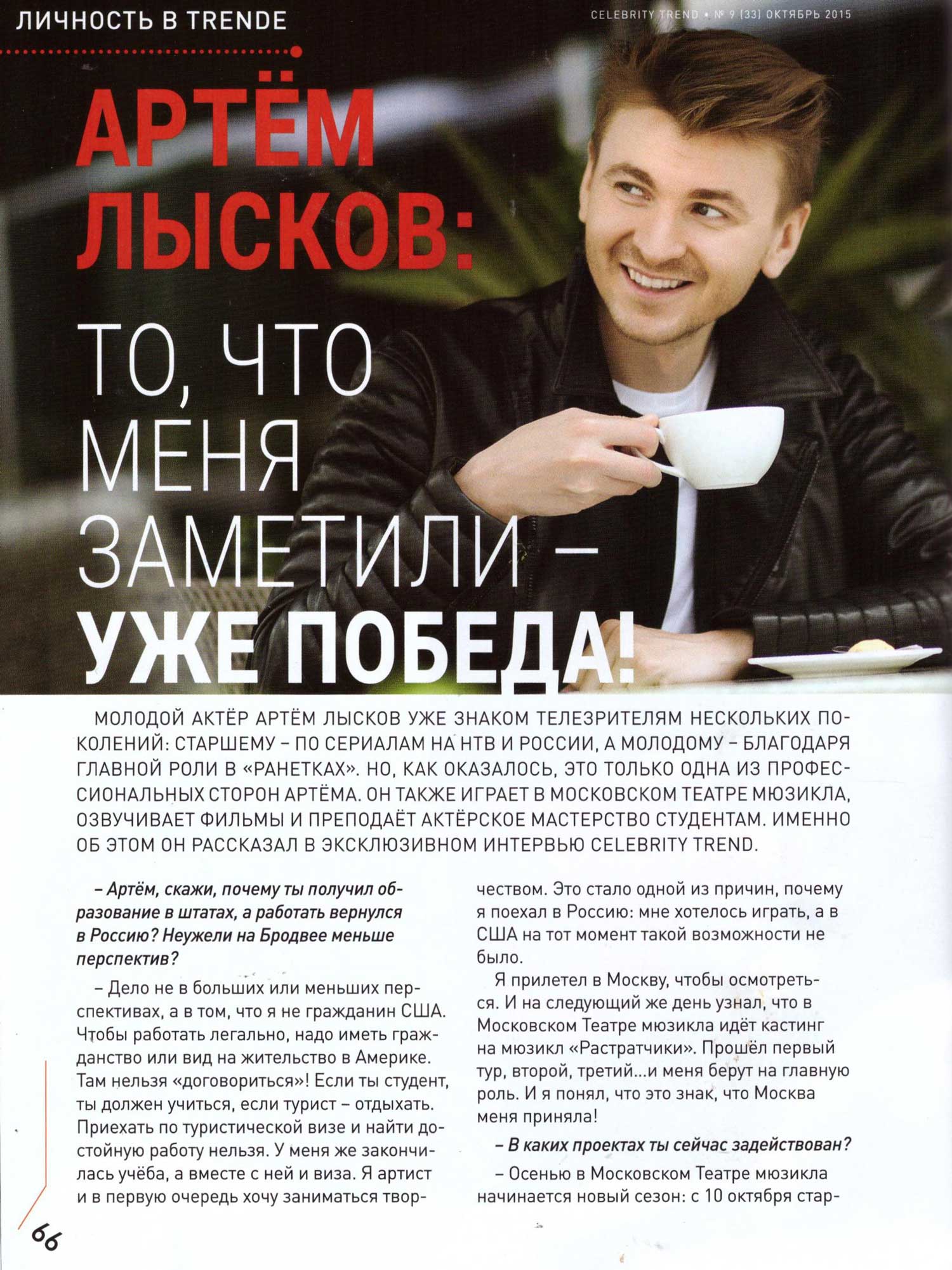 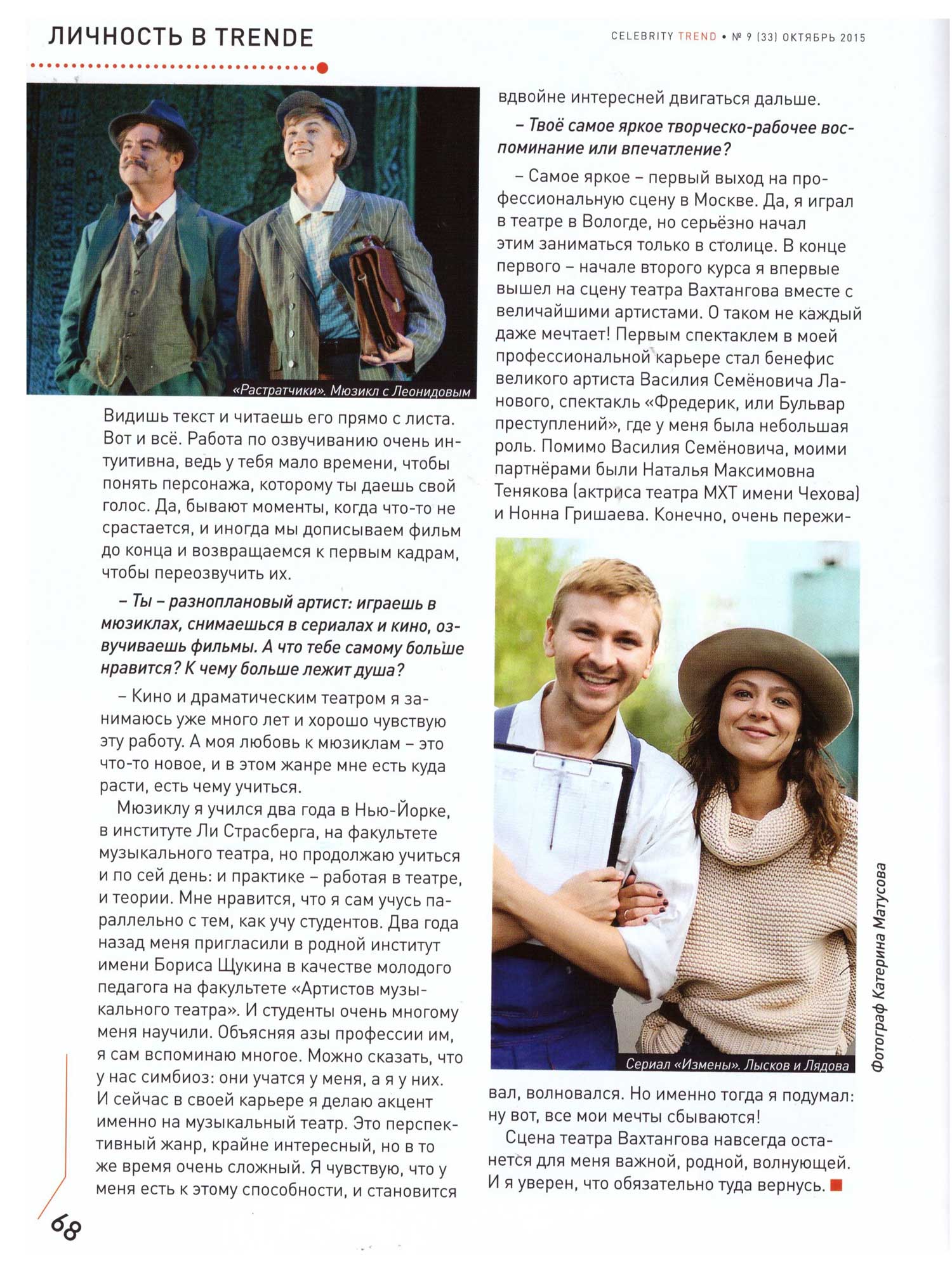