Anatomy of a musical

How and why Russian musical theatre industry differs from the US one. 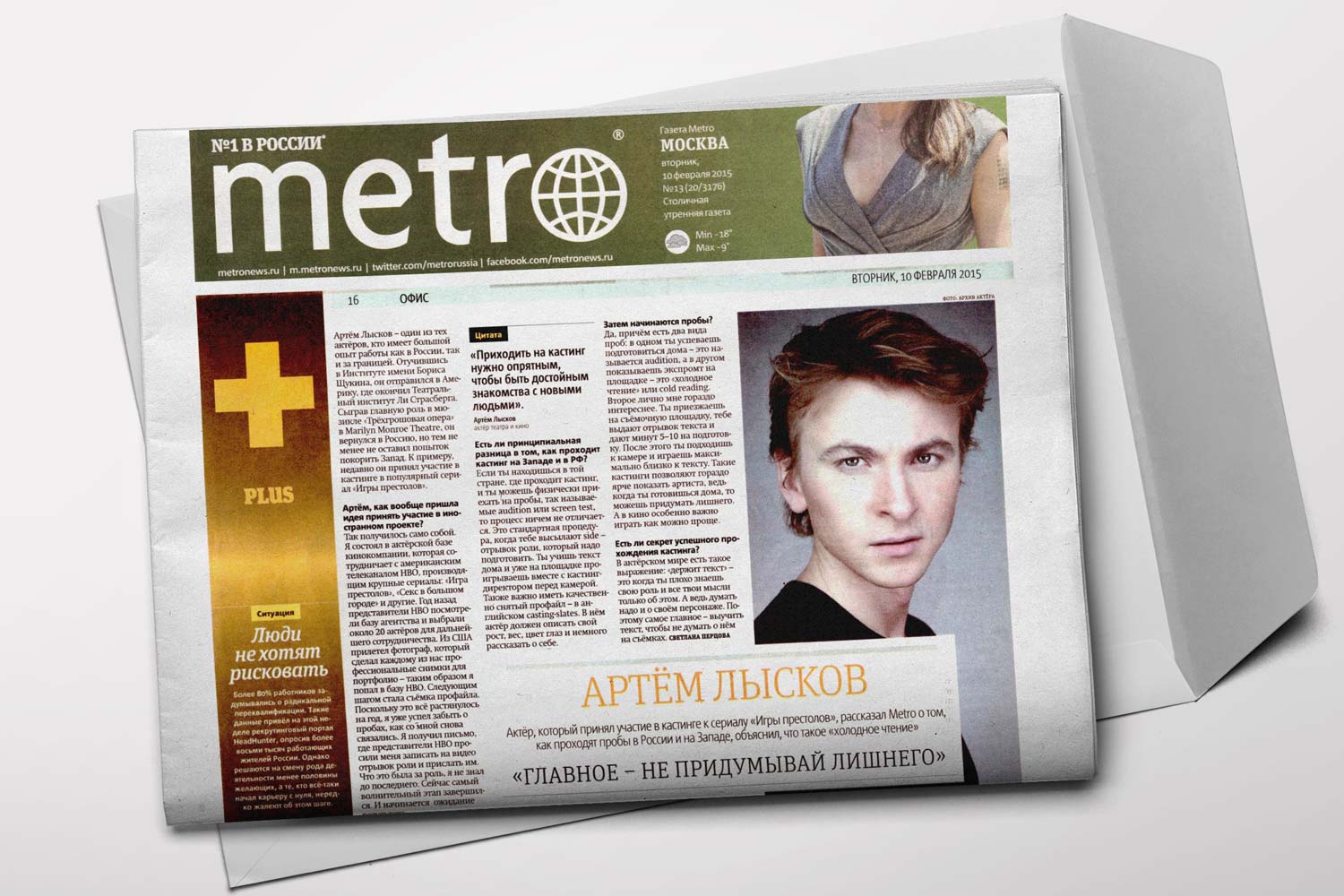 The era of musicale theatre is coming to Russia, although this genre is practically not taught in the art colleges of the country. The “NG” reporter Vladislav Maltsev talked to actor Artem Lyskov, the Lee Strasberg New York theatre and film University graduate and the Boris Shchukin University young teacher, about the development of musical theatre in Russia and abroad.

- How do you estimate the trends in your genre from the inside?

- Musical theatre in Russia has changed a lot for the better in the last five years – regarding quantity and quality. When I was graduating from my University in 2008 there were few musicals presented on Moscow stages. Theatre company “Stage Entertainment” did a production of “Beauty and the Beast” in Moscow – a musical that’s been very successfully running on Broadway since 1994. At the same time several other musical shows were running in Moscow theatres. What do we see now? Quality projects of our Russian authors and composers such as “Embezzlers”, “Times cannot be chosen”, “All about Cinderella”, “Count Orlov”, “Monte Cristo”, “Red Sails”, “Once upon a time in Odessa”, “Life is beautiful” have appeared in the recent years… Not taking into account the official shows brought from the western countries. It is not a coincidence that two new musical theatres were opened in 2012 in Moscow – “Russia” (the former Pushkin Theatre) and the Moscow Musical Theatre (based on the Gorbunov Cultural Center). It means there is a demand for various musicals among our audiences.

One can even say the era of musicals has begun in Russia, the era that’s been present in the USA for a long time. And it is quite possible that we will soon be able to catch up with Broadway where 20-30 musicals run every year. To compare: there are around 10 of them in Moscow now.

But we’ve got one big problem that stands in the way of this genre’s development: there is still practically no education opportunities for musical theatre actors these days, and we’ve only started moving in that direction in the past few years! For the world of theatre education in our country musicals are still new and undiscovered. There have been musical theatre departments for a long time, for example the one in the Russian Academy of Theatre Arts. But they mostly prepare young classical singers who proceed into the opera genre.

There are few artists who work in the genre of musical theatre: we all know each other and jump from one project to another. It was only last year that my Boris Shchukin University opened a special department for actors of musical theatre. They offered me a teaching position there because I had just returned from the US after my studies.

- How did you find yourself studying there and where exactly did you study?

- I graduated from the Shchukin University as a drama, film and stage actor in 2008. As a student I discovered musical theatre and realized I wanted to work in that genre, but back in those days we couldn’t get that kind of education. But afterwards I was lucky to get into an amazing adventure, it was like a call of destiny. My friend who used to study with me decided to get a degree as a producer in the US and she was going to travel to New York to see all the relevant colleges and offered me to tag along.

We went to several Universities including the Lee Strasberg Theatre and Film Institute founded in 1969 by actor and director Lee Strasberg. That was where I saw the department of musical theatre. We were allowed to visit an open class. When I saw the way the education process was built there I realized that was what I needed. A little bit later I became a student at that University having won their grant. There were two years of studies ahead of me, and it was difficult to leave Russia: we had just wrapped up the filming of “Ranetki” and my film career was developing really well, but I told myself – if I don’t take this opportunity I will regret my whole life. And I am glad I decided to go, those studies gave me a lot. I can talk about it for hours, but I can say I learned from personal experience that the American education system is different from ours. Not to mention the fact that they have a lot of subjects we don’t have at all!

- The profession of acting is a sort of a business, Americans pay a lot of attention to that. They teach you advertising, marketing, PR interaction, giving interviews and communicating with the audience. Unfortunately, no attention is paid to that in Russia. Our education system teaches how to act, but doesn’t teach how to get a job! And this is the first thing students encounter once they leave the walls of alma mater. A huge amount of talented actors simply cannot go through a casting process because they feel lost and scared due to their lack of experience.

One of the subjects we were taught was called “casting”. It teaches how to look for a job, make connections, present yourself as an actor. We were taught not to be afraid of cameras, how to act wround directors. Everyone got personal advice on how to dress up. All of this is very important! In class we were polishing our skills of going through casting, then we watched the recordings, discussed them and drew conclusions.

There is a course called Soaps where they teach you to act in soap operas (or sitcoms). Its specialty is being filmed from six different angles at the same time and you need to be able to look good in every one of them. The classes are taught on sets with the lighting similar to the actual sitcom sets.

Then there is Acting in film, the actual craft of acting in movies. You are taught how to hold the lights, think about the microphone, not to intervene with other lines etc. Those are the real filmmaking skills that they don’t teach us here.

What other subjects did we have? Auditioning for musical theatre where you have to show off your vocal skills in only 16 bars. Musical theatre itself where they teach you cues for the songs, and Performance where they teach you to work with the director. Improof is a very cool subject, it teaches you to enter the acting circumstances momentarily. We were doing exercises for several months and then the teacher would tell us to come up with a scene, and later other people would join you and you improvise all together.

- How is the acting training different from ours?

- Lee Strasberg’s system is based on emotional memory. Not long ago a movie about Marilyn Monroe was on Channel 1, it explained a lot about this method. Emotional memory classes are divided in two: the training and the scenes. At the training classes you learn to dig into your memories, make yourself very emotional. The easiest Strasberg exercise is called coffee cup where you sit on a chair (they always give you the uncomfortable ones) and have to remember the feeling of a warm cup in your hands in the morning, the taste of coffee, and you must relax… The more difficult exercises are the ones where you have to remember childhood traumas, go back to the day something happened to you, remember the details. During this training everyone usually cries, rolling on the floor in hysterics. That’s how they teach yout to act, if you need to cry in a movie scene they tell you to remember a sad moment from your life. Here, the learning process is more exciting while the show is being made, the Russian acting system is considered one of the best even in the US for a good reason. For instance, when my character Vanechka in “Embezzlers” is committing suicide, I cry because I’m thinking about dying at that very moment and not because I’m remembering how my cat died, according to the American method. But the substitution method, emotional memory, works really well in the movies where thereis not building up like on stage and you have to reach the result immediately.

The basic education of an actor in the US is shorter than ours – two years instead of four, because they only teach to play yourself, not other people. The course that teaches you to play yourself takes only 1,5 years in Russia, then they proceed to work with another person’s image. But the market is crowded in America, so all the young actors start off by playing themselves and are cast because of their looks. And only later, when you prove you are worth something, you are allowed to play a character who is different from you.

- How is their musical theatre industry different?

- In America producer is the central figure and his part is different from what producers do in Russia. In the US he organizes the whole process and doesn’t simply give money, as many seem to think. How do they make new musicals? There are such things as workshops where young actors often start off before Broadway. It goeas like this: a producer, a writer, a director and a composer collect a group of actors who work for free at first. They create a musical all together, then show a couple of songs to the press and investors. If it goes well and the investors are ready to give money, a detailed work starts. When the musical is ready it doesn’t immediately go to New York. A theatre is rented, for example, in Boston, and the show is being run there to see if the audience likes it. The show is analyzed, some aspects are changed if necessary. I six months’ time the show gets polished to perfection. And then they take it to Broadway. Here in Russia we lack such a detailed preparation and alanysis. But we are moving forward and developing by learning through mistakes. 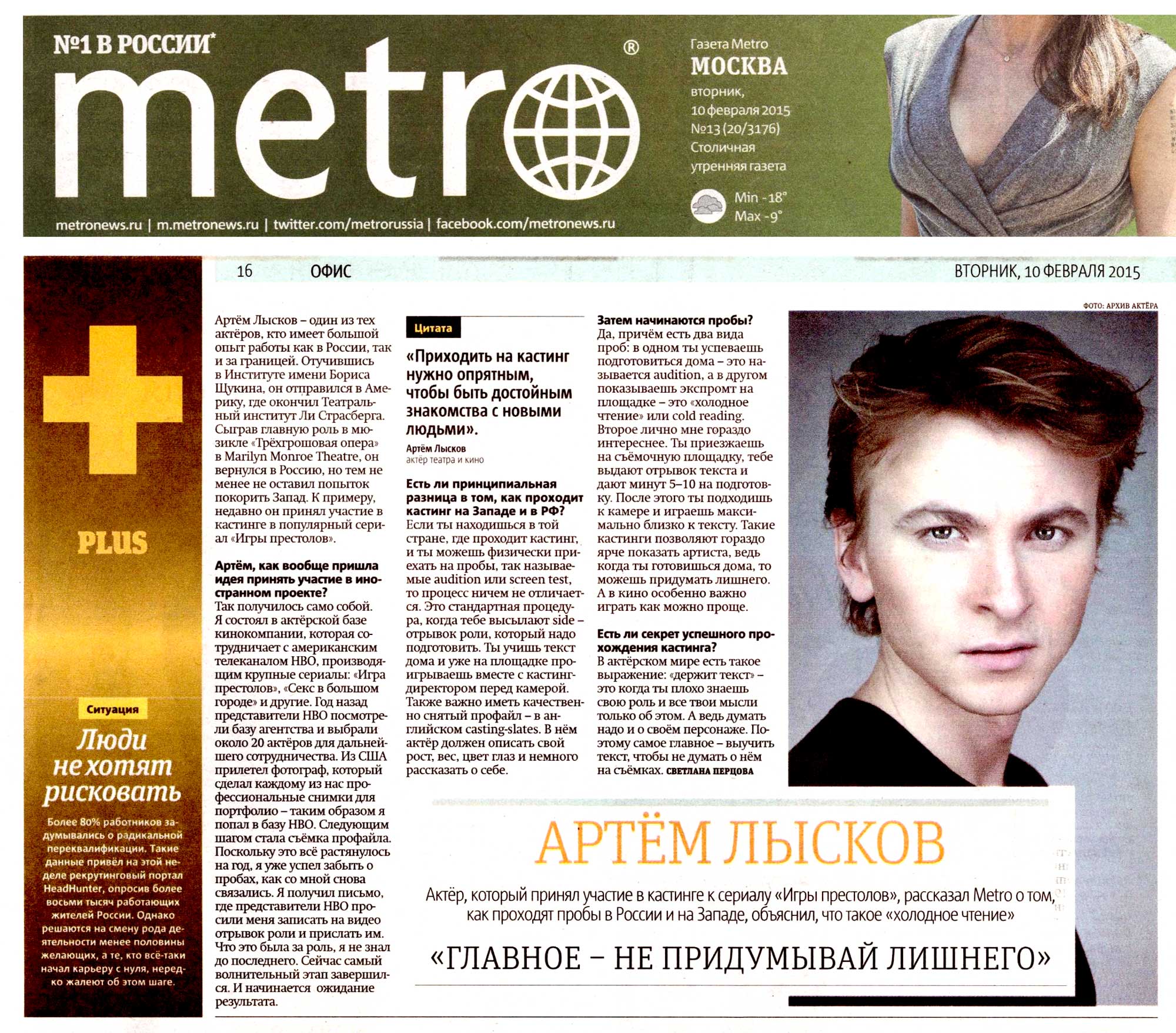